Last year one of our tenants Levelle London released his record Traits of an Empath, marking the beginning of the success he is now experiencing in the music industry. His story is an inspiration not just to other tenants and participants here at Peter Bedford, but to us all: the idea that with enough determination, hard work, and the relevant support people who have experienced societal disadvantage or personal struggles can overcome these barriers and achieve success.

Levelle was first referred to our services 18 months ago by the charity Alone in London, and we provided him with accommodation in Hackney. He was homeless, and his long-standing struggles with anxiety and depression were exacerbated by the hardships that go along with the absence of a secure place to sleep at night.

The one thing that remained constant in his life was his passion for music. Levelle has been making music from a young age, which led him to study music at South Thames College. Here he made valuable personal connections and felt that doors were starting to open for him. Levelle was living out of a bag, but despite having no permanent residence he managed to attend his classes by sofa-surfing between friends’ houses. 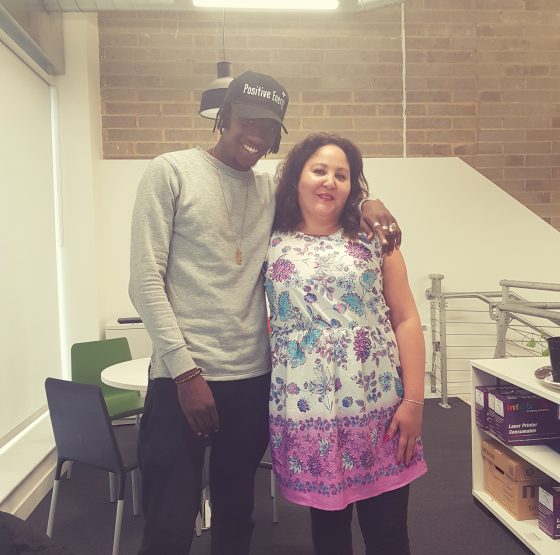 Levelle with his Recovery Coordinator, Mariama

After years of perseverance, the release of Traits of an Empath finally changed things. ‘Now it’s all happening,’ he said, as though he couldn’t quite believe it. International festival appearances, collaboration requests, and a rapidly growing fan-base are the stuff of dreams for someone trying to make it in the music industry, yet he admitted he feels quite detached from it all until he talks about in interviews.

Levelle recently shared a doodle that he had drawn back in 2015 on Twitter, which captures how surreal it must feel better than words. In the pencil drawing he depicts himself on stage performing to a large crowd, and underneath it is mirrored by a real-life photograph of him performing on stage to masses of people, just liked he had imagined.

When he came into our offices last week for a meeting with his Recovery Coordinator, Mariama, Levelle had just returned to the UK after an all-inclusive trip to the Dominican Republic. However, despite these trappings of new-found success, he emphasized the importance of remaining humble and staying close to your roots.

Homelessness has been a defining influence on his music, and while his personal struggles have been channeled into something positive through creative expression, he believes they have also hurt him in other ways. Looking forward, he says he’s now learning to record and produce, and this year he intends to explore happier themes in his music. We can’t wait to see what the future holds for Levelle!