Minister of State at Department for Work and Pensions visits PBHA

Minister of State at Department for Work and Pensions visits PBHA 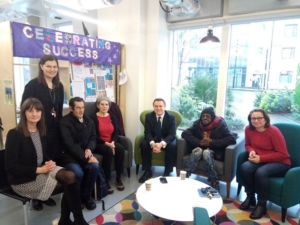 Minister of State for the Department for Work and Pensions Will Quince visited our Hackney site at Kingsland Hub last week in a visit organised by Kate Henderson, CEO of the National Housing Federation. Will met participants of the Next Steps with Computers class and their tutor Richard Lackrage, and heard their experiences learning IT skills and their importance given that Universal Credit is claimed online. This was a good chance to show the government that we are helping the wider community, as well as our tenants, build skills for the future, as well as to claim welfare benefits.

Ann, a participant, said “Learning about how to use the computer is one of the best things I’ve done, I wish I’d done it years ago”.  Enterprises and Training Manager Anjum Ahmed explained how valuable the 1-1 support and mentoring of the Digital Champions programme is in equipping vulnerable people with the life skills needed for today’s world.

The Minister also met a number of tenants and discussed their support, our service, and their experience of Universal Credit.  Concerns were raised about the move to Universal Credit and the anxiety caused about the waiting period and sanctions.  Despite having multiple health concerns and vulnerabilities, another tenant is currently under sanctions after his memory loss meant he missed a Job Centre appointment.  The Minister committed to looking into this tenant’s case, and his case worker Mirka explained that he had not been well supported by the DWP.  The Minister recommended we set up surgeries with the local Job Centre staff to iron out any concerns.